The Game of Thrones world, just like the real world, has some pretty horrible villains. The Iron born may not be the most fearsome or the Ultimate Boss (in Dungeons and Dragons terms), yet few villains are so proudly destructive as House Greyjoy of the Iron Islands. Even their house words (“We Do Not Sow”) describe them as “takers” not “givers” or even rulers. Therefore we at the Game of T cells have decided to associate the “Big C”, cancer with the Iron born. We will of course come up with a Cancer Sigil and house words of our own, (anyone got ideas??), but for now the point of this blog is NOT to introduce House Cancer, but to connect the CD4/CD8 ratio to something other than HIV.

Now I know…I know…many of you feel the Iron born are not “evil enough” to be cancer, and others think the “Big C” (Cancer) deserves a star role like Little Finger, or Ramsey Snow, but if you have read the books you know the Iron born throughout history have been a never quite cured menace to Westeros since the Age of the 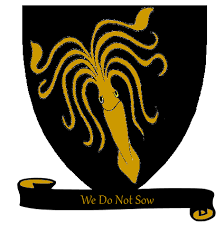 First men. Way before the events on the Show, the GreyIrons of the Iron Islands first conquered large sections of Westeros. Later House Hoare restored the Iron born to controlling a large patch of Westeros. The Greyjoy rebellion just before the show starts is only the latest metastasis to occur. (Shout out to Jensen who is studying to be a Maester for pointing this out to me.)

Anyway whether you agree or disagree about whether Cancer and the Ironborn deserve each other, please, stay with me now for one more left field twist. One of the biggest recent advances in cancer therapy has been a long sought after, but till now rarely successful therapy called immunotherapy.  Immunotherapy for cancer has taken many forms but a relatively simple and sometimes shockingly successful form is known as “checkpoint inhibitors” (if u watch late night TV, likely you have seen the commercials for Opdivo and Keytruda which “release” a safety brake/checkpoint on patient’s immune system sometimes allowing the patients own immune system. These therapies target PD-1 and CTLA-4 two important, necessary immune systems brakes. Of all the bizillion types of cancer therapy, why bring these up? Well there are pubs I want to highlight that suggest the balance between specific immune cell populations are critically disturbed by some cancers, and moreover the exact nature of these disturbances give insight into whether or not Checkpoint inhibitors work, which is still quite hard to predict.

The strongest data that the balance between CD4 and CD8 cells influence susceptibility to cancer comes from among People Living With HIV (PLWH). The cancer risk among PLWH is heavily concentrated in those with low ratios1. Even patients without HIV who have cancer and low CD4/CD8 ratios are more likely to have metastasis2. Finally, some work already has suggested that the neutrophil/ lymphocyte ratio has utility in predicting both prognosis3 and response to Checkpoint inhibitors4. So far though, the CD4/CD8 ratio (as opposed to the neutrophil/lymphocyte ratio) has not yet been evaluated to see if it also indicates response to checkpoint inhibitors

Is more work needed to either strengthen or disprove the link between immune cell balance and cancer, and/or response to Checkpoint inhibitors? Absolutely, but just like those harsh, infertile Iron Islands keep birthing, not just raids but invasion forces it is unlikely that cancer will not remain a problem and opportunities for at least scientific glory, as well as helping people abound if design new attacks against the Iron born.