In the Game of Thrones it is common to have a large army at your back, a festive celebration, a great plan, and then suddenly it all comes crashing down. This is how I felt recently. To set the stage, for years I’ve been scratching my head trying for figure out how to “fix” ratios that are “abnormal”. In the case of People Living With HIV (PLWH), clearly, viral suppression with medication is a critical factor that allows a abnormally low CD4/CD8 ratio to rise closer to normal, but it is also often not sufficient. Sometimes PLWH who are taking their medication regularly have little to no rise in their CD4/CD8 for a long time. Only when something else happens (if anything ever does) will the ratio begins to normalize. With ratio normalization comes less risk of cancer, and heart attacks. I’m confident that with enough research low ratios are “fixable”. But what do I discover is the first widely replicated way of raising the ratio??…the one thing that is clearly unhealthy- smoking cigarettes! Clearly not all bannerman are loyal! 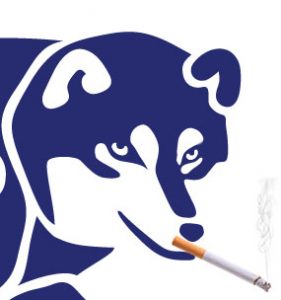 My enemies are clearly clapping their hands with joy over this. The humiliation is palpable. But let me explain the data and then you can make up your own mind.

Recently an analysis of almost 800 PLWH who achieved and maintained persistent viral suppression for a minimum of 4 years was published1. Importantly, the CD4 absolute count, the % of T cells that are CD4 and the CD4/CD8 ratio all rose during this long-study, but the absolute CD4 was clearly leveling after a few years. There was less leveling off in the % CD4 and the least in the ratio. It is wonderful that there was recovery of CD4 count, CD4% or CD4/CD8 ratio, but even after median of 7 years of follow up the majority had not achieved a “normal” ratio which fits with many studies showing a persistent immunologic problem not predicted by CD4 in PLWH. These findings alone are disheartening, but hardly surprising as we have discussed many times in this blog.

One surprising thing that this analysis revealed though was that patients in this cohort who smoked had a higher ratio in multivariate analysis than those who did not. Now, strange things show up in multivariate analysis, not all of them true. Yet in this case the authors remembered data from way back in 1989 in which researchers carefully investigated a well-recognized effect of smoking on both circulating total white blood cell count and lymphocytes. In this older study (an all-white cohort between age 20-69) of active smokers having an average ratio of 2.42 vs 2.13 for nonsmokers. The study wasn’t able to quantitate smoking exposure very well but there was at least the suggestion that this fairly large difference resolved when smoker’s quit. This change was almost entirely due to raising CD4, rather than lowering CD8, and other immunologic changes have been reported to be associated with smoking. Smoking is not only is associated with inflammation but also blocks normal airway defenses, so smokers have more frequent low-level infections. The molecular effects of smoking are complex and specifically exacerbate many immunologic diseases. This includes rheumatoid arthritis by increasing citrullinated proteins, but there are some diseases in which some positive effects, most famously ulcerative colitis seem immunologically mediated (though smoking is still bad). Smoking causes autoreactive TH1 and TH17 cells to attack the lung and this is one of many mechanisms of why smoking cause emphysema and the cells from the peripheral blood can carry out this autoimmune attack when stimulated on naïve lung tissue.

Allow me to be perfectly clear. Even though CD4/CD8 ratios above 0.4 are associated with less cancer and coronary disease. it is clear that smoking is not good for anyone, especially PLWH. Thus no one is advocating “raising” ratios by smoking. That said this confounder means that we are likely underestimating the negative health consequences of having a low ratio. The search for healthy ways to raise the ratio goes on, but this shows not all exposures that raise the ratio are good. Traitors abound.