Hello again dear readers. Sorry to interrupt Season 8 of Thrones, but there is a hot of the press clinical series/ case reports on an experimental therapy for a deadly viral infection. In the three reports (2 case reports in the same issue) there are all told only 10 patients and three individuals didn’t clearly respond to therapy like the other seven, but for this deadly virus that is still something to blog about. Today I will blogging about the CD4/CD8 ratio in (mostly) nonHIV context. I suspect some of you have already seen in that famous citadel of knowledge, then New England Journal of Medicine that Progressive Multifocal Leukoencephalopathy (PML) caused by JC virus can be at least temporarily be reversed by checkpoint inhibitors.

For those that need an introduction….PML is a strange and devastating neurologic disease in which the immune system attacks the protective myelin in the brain yet paradoxically occurs in immunosuppressed patients. 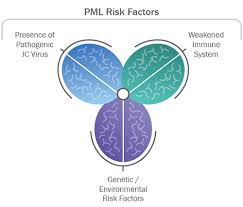 Mortality in PML if the immunosuppression cannot be reversed is > 70% in less than a year. A weakened immune system though is not “enough”, to get PML a normally asymptomatic but potentially pathogenic chronic JC virus infection is also needed and likely other factors (check out the artistic graphic to the left I took from pml.consortium.org).

HIV used to be one of the most common reasons people developed PML, but now that HIV immunosuppression is largely reversible, pharmacologic immunosuppression, particularly anti-CD20 antibodies (rituximab) are feared triggers of PML. Checkpoint inhibitors are new immunotherapeutic drugs sweeping cancer therapy that “takes the brake” off an exhausted immune system so that it can once again fight cancer. Immune systems need brakes otherwise antigen driven proliferation would turn the body’s response to an infection into a cancer, but in the context of fighting cancers, sometimes these brakes get in the way. Apparently taking the brakes off can also help fight some cancers.

So why am I blogging about this small series of patients of which one didn’t improve and two died? Well first of all 2 similar but different therapeutic antibodies to the T cell exhaustion marker PD-1 were used in 10 patients with PML responses were seen… suggesting PD-1 blockade was the mechanism. PD-1 blockade was attempted because PML patients tend to have T cells with lots of PD-1 on them, both CD4 and CD8, but particularly CD8 which suggests some imbalance. In the 8 patients from the case series that data was reported, all 8 patients had “abnormal” CD4/CD8 ratios (meaning <1 or > 3, “normal generally being ~1.4-2.4). Admittedly two of these patients had HIV as well, so perhaps the ratio was “only abnormal” from the HIV disease but they were each <0.4 so quite low. Two of the eight had actually high ratios (3.4 and 5.2) but only the one with the ratio of 5.2 had clinical response. Unfortunately, we don’t know if the checkpoint inhibitors pushed the ratio towards normal or not but we do know that many of these patients had elevated JC virus in the spinal fluid before checkpoint administration, with declined when given checkpoint inhibitors. So in the 8 success stories that have now been stable for months after their last checkpoint inhibitor dose there were multiple markers of response clinical, imaging of the brain, as well as virologic.

While these cases are exciting, an accompanying editorial pointed out that some patients treated with checkpoint inhibitors have developed PML, and we really need confirmatory trials. That said perhaps the ratio should be a prospectively used biomarker in these trials.

Read the full article at: https://www.neurologylive.com/clinical-focus/pembrolizumab-progressive-multifocal-leukoencephalopathy-patient-subsets