Welcome back sweet summer children. Anyone who follows Game of Thrones knows that any war or strategy is full of hope but also, missteps, and disappointments. All one can do is lick your wounds and move on. For this issue, we want to highlight a bold attempt to restore the CD4/CD8 ratio in HIV infected patients…that didn’t quite do what people wanted, but maybe some important reconnaissance was gained. If you read this blog regularly, you know that a low CD4/CD8 ratio is associated with bad clinical outcomes particularly in People Living With HIV, (PLWH), but also with patients who don’t have HIV. The question is can a low ratio be “fixed” in either PLWH or nonHIV infected patients. An intrepid group of raiders from UC San Francisco decided to give it a try. 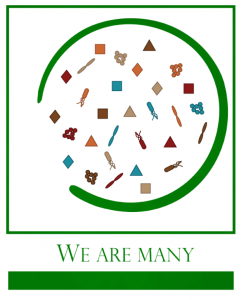 First though some background. Everyone has “good” bacteria all over their body but particularly in their gut. This is known as the gut microbiome. This collection of cells actually far outnumbers the human cells in the body. The microbiome is a key factor in our digestion and probably many other aspects of our metabolism and gives new meaning to stress eating. This technically makes you and everyone else a “super-organism” since our physiology is more versatile than if we had no bacteria helping else. We become less super though when we take antibiotics and there is a lot of dying going in the microbiome. Also, everyone’s microbiome is different and unique like a fingerprint, but there are trends. For example, older people tend to both have less diverse microbes (note the lovely diversity in the house Sigil to the right, thanks Becky!), and be more susceptible to C. Diff. Unclear if that is a coincidence or not. Typically, the microbiome recovers quickly, but sometimes our gut stays a barren wasteland after antibiotics. Only a few bacteria still growing well, most famously the pathogen Clostridium difficille. Stool transplants (also known as “fecal bacteriotherapy” or “poop restoration”) are commonly used in this altered microbiome situation, C. diff infection to bring things back into balance and stop the diarrhea.

Now back to our intrepid raiders. At first their plan appears about as stupid as the mission to capture an undead zombie and bring it south of the wall in the show to unite people against the “real villains”. On closer inspection though many PLWH have some loose stool and digestive concerns, and it is clear that the loss of CD4 cells in PLWH is associated with an altered intestinal microbiome. This altered microbiome is not easily returned to normal even when the CD4 count is restored when PLWH start medicine. So, our raiders decided to treat some PLWH who had presumably definitely had low CD4/ CD8 ratios and presumably altered microbiomes with stool transplants to see if they could restore both the microbiome and the ratio in one daring maneuver. Unfortunately, not much happened. In this study, antibiotics were not used prior to the transplant and the entirety of the donor microbiome failed to persist. This was a pilot study with 6 subjects, but only 4 had very low ratios of <0.6 and we only know that overall the ratios didn’t change much. However, a few species were able to make a lasting impact. Small increases were seen in the Ruminococcaceae and Rikenellaceae families of bacteria and a small decrease was seen in the Erysipelotrichaceae family. Persisting increases in Ruminococcaceae also occur in successful stool transplants for C. diff infection which decrease inflammation, but successful stool transplants in that situation also increases Lactobabacillacae, Desulfovibrionaceae and other bacteria (2). It is unknown whether the lack of lasting effects of the transplant is due to the lack of antibiotic clearance, the lack of influence from C. diff infection, or something else entirely. For people whose “good bacteria” are nearly wiped out and C. diff is over-growing everything stool transplants work great. Stool transplants also appear to be safe in the setting of your average patient recovering from an infection that required antibiotics. A lot of work though needs to be done to know if they are truly safe in immunocompromised patients, not to mention which components are needed for such “crude” therapy to be successful.